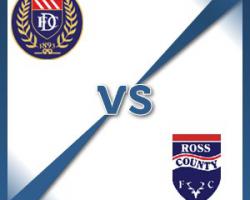 Dundee V Ross County - view commentary, squad, and statistics of the game live.Harris poised to make Dundee debutDundee new boy Alex Harris is in line to make his debut in Sunday's Scottish Premiership meeting with Ross County at Dens Park.Harris has joined Paul Hartley's men on loan from Hibernian until the end of the season in a swap deal which takes winger Martin Boyle in the opposite direction to Easter Road.And Dens boss Hartley believes the 20-year-old wide player can be a big success for his side who are bidding to end a seven-game winless run in the league.Hartley said: "I'm delighted that Alex has joined the club."He is someone that gives us something different and will go right into the squad for Sunday's match."Meanwhile, Hartley admits Dundee face a tough task against County in their attempt to recover from their 6-2 New Year's Day defeat by local rivals Dundee United.He said: "This will be another hard game."County will come here and make it as difficult for us as possible."We know what to expect so we'll have to do better than we have been doing to get a positive result."Dundee hope skipper Kevin Thomson will be able to return from a leg injury which kept him out of the derby defeat.Ross County manager Jim McIntyre has told his team they need to do the simple things better when they come up against a side similarly hurting from New Year's Day derby pain.Scottish Premiership bottom club County were beaten 3-1 at home to Inverness after Dundee were thrashed 6-2 at Tannadice and McIntyre knows his players must go back to basics when they take on Paul Hartley's team at Dens Park on Sunday.The County boss has added to his squad by signing former Limerick and Nuneaton striker Craig Curran and he showed he was not afraid to make changes on Thursday when he hauled off Yoann Arquin and Terry Dunfield in the first half against Inverness.McIntyre said: "Both teams will be hurting and it's up to us to go and show a response."But the one thing we know we need to do is do the basics better

That was all missing on New Year's Day."Inverness were by miles the better team and that's a hard thing to say."