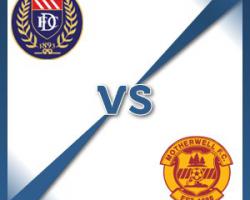 Dundee V Motherwell - view commentary, squad, and statistics of the game live.McPake set for spell outDundee defender James McPake faces between two and four weeks on the sidelines after cracking a rib during his team's draw against Ross County on Sunday.Midfielder Kevin McBride and goalkeeper Kyle Letheren (both thigh) remain out and Simon Ferry has just started training following an ankle injury.Recent signing Kostadin Gadzhalov could make his debut after the Bulgarian defender impressed in reserve games.Dundee have not won in eight matches but manager Paul Hartley said: "We've just got to keeping pulling together and working hard to get through this."We'll go again against Motherwell and hopefully get that win."Well manager Ian Baraclough still hopes to make new signings despite extending defender Mark O'Brien's loan from Derby, although he admits he will "possibly" have to move players out beforehand.Baraclough, who is also keen to extend loan striker Henrik Ojamaa's stay, added: "I'd like to bring one or two in that can make an impact and help the group."We've had seven or eight injuries since I've been here and a lot of them are senior players

That takes its toll eventually."To freshen things up and bring someone would give everyone a lift.Motherwell have loaned young defender Morgan Neill to Ayr for a month but Baraclough added: At the moment it's been very difficult to move people out, even if I wanted them to move out or they would like to move out, because we haven't got the numbers."Towards the end of January, one or two may feel they need to get regular games."